The Shell Centre was founded during 1967, largely as a result of the efforts of the Professors of Pure and Applied Mathematics in the University of Nottingham, Heini Halberstam and George Hall. They persuaded the Vice Chancellor, Sir Frederick Dainton, of the importance of the post-Sputnik international effort to improve the teaching of mathematics in schools. Some mathematicians at that time believed that the keys to improvement were a deeper understanding of the subject by teachers and a focus on fundamentals in teaching. Dainton in turn persuaded the leadership of Shell UK Ltd to fund the Centre for four years as an “extra-faculty research unit”. Three full-time lecturers were appointed: Alan Bell, Robert Lindsay and Ruth Tobias, later replaced by David Hale. Their brief was to lead professional development activities across the East Midlands, as well as continuing their various national roles.

The Centre was seen as successful so the University persuaded the University Grants Committee that the Centre’s funding should be included in the University’s block grant from government for the 1972 quinquennium, and a chair was added. Vernon Armitage became Professor of Mathematical Education in the Mathematics Department and Director of the Shell Centre. His broad background combined teaching at Shrewsbury School, advising the School Mathematics Project, and research in number theory. The work of the Centre continued to focus on professional development activities, building close links with David Sturgess and other mathematicians in the School of Education. In parallel, Alan Bell worked with the heads of mathematics in two local schools, David Rooke and Alan Wigley, to develop Journey into Maths – teaching materials for students aged 11-14 that included a strong investigative element. When in 1975 Professor Armitage decided to return to the University of Durham, Nottingham again sought a successor with a background in both mathematical research and work with schools.

Hugh Burkhardt was appointed. A theoretical elementary particle physicist, he had since 1963 pioneered the teaching of mathematical modeling – to undergraduates and to teachers in professional development workshops. Far from convinced that we know how best to teach mathematics, he negotiated with the University a broader brief: “to work to improve the teaching and learning of mathematics regionally, nationally and internationally”. The vision was, and is, to focus on research, design and development that will have direct impact on what happens in school mathematics classrooms.

He saw various things as central. With a team of just four permanent staff, he decided that any large-scale influence could only be achieved through reproducible materials that support more effective teaching. Since teachers are busy people and change inevitably involves extra demands, it was and is crucial to find levers in the education system that will encourage teachers and other professionals to make the substantial effort needed. He saw people’s lack of confidence in and enjoyment of mathematics as a curriculum failure; encouragingly, there were rich and interesting mathematics materials that contrasted with the procedural nature of most mathematics textbooks, and lessons. This suggested an important role for imaginative design. 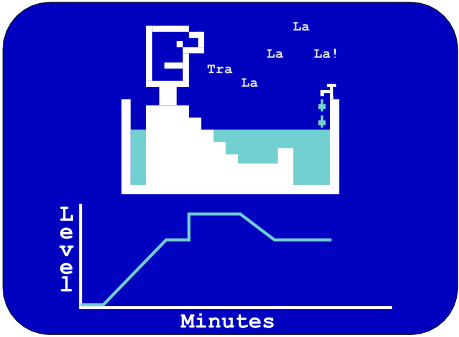 Thus the late 1970s began an ongoing search for outstanding designer-researchers. The new opportunities that computer technology offer led to a collaboration with Rosemary Fraser’s group in Plymouth, developing her original and powerful approach based on a single ‘computer + television display’ per class. This brought talented people into the Centre including, notably, Richard Phillips, Daniel Pead, Rita Crust and Rosemary herself. The key appointment of Malcolm Swan in 1979 developed gradually into his design leadership of many of the Centre’s projects and, ultimately, his becoming Director.